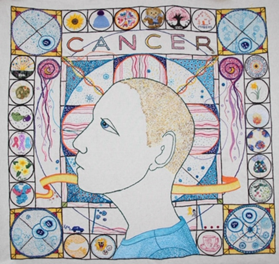 The Cancer Tapestry is designed by Andrew Crummy, who designed The Great Tapestry of Scotland and other tapestries. The idea of the Cancer Tapestry was launched in Falkirk at the RISE (Resilience: Inform, Support, Empower) sarcoma event organised by Dr Nixon, Andrew’s oncologist, for patients and carers in 2018. During that event, Andrew shared his own journey and spoke about how his art, his family and the medical team helped him cope during his cancer treatment. He also shared the idea of a tapestry on cancer and this was massively endorsed by the patients and their carers.

Rod Mountain, ENT Surgeon and educator in Ninewells inspired Andrew to use his art to do a tapestry about cancer.

The Cancer Tapestry was launched at the Scottish Parliament on the 4th February where Andrew Crummy, Rod Mountain and Dr Nixon met with Jeanne Freeman, Cabinet Secretary of Health. The first stitch was added by Jeanne Freeman at the heart of the tumour

Final Stitch of the first panel:

On the 26th May 2020, the final stitch of the first panel was added by Heather Swinson, a cancer survivor and lead for the first panel. The final stitch was due to be added by Health Secretary Jeanne Freeman MPS, however lockdown meant stitcher Heather Swinson had to do it herself during an online closed ceremony attended by Ms Freeman, Andrew Crummy, Dr Nixon and Mr Mountain.

Ms Freeman said at the ceremony: 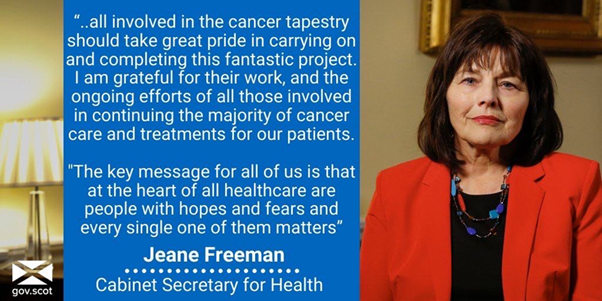