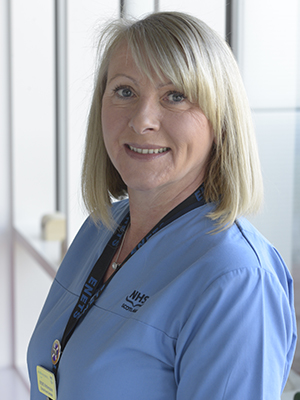 Irene qualified in 1991 and initially worked in a variety of medical wards. Following completion of a BSc (Health Studies) Irene moved to Ross Hall Hospital in 1999 to lead and develop the Oncology and Breast Cancer Nurse service.

In 2003 Irene moved into the first substantive post as Palliative Care Clinical Nurse Specialist in the Victoria Infirmary, Glasgow. In the subsequent years Irene has had a combination of Clinical and Education roles within Palliative and Cancer Care and Universities.

Irene completed an MSc in Specialist Nursing (Palliative Care) and gained a Specialist Practitioner Qualification in Palliative Care in 2009. In recognition of her academic work Irene has been recognised as Fellow of the Higher Education Academy.

In May 2016 Irene took up post as Advanced Clinical Nurse Specialist for Neuro-endocrine Tumours and Thyroid Cancer at the Beatson West of Scotland Cancer Centre. She has subsequently completed a Clinical Skills module and become a non-medical prescriber.

The Beatson West of Scotland Cancer Centre was accredited as a European Centre of Excellence in the treatment of neuroendocrine neoplasms in 2019.